Had problems blogging earlier, so here is info from the previous stop.


6/20 - Drove to Doyle River trailhead in Shenandoah National Park. Don and Jean Marie (from Waynesboro) met us there and gave us a ride to Jennings Creek after Starbucks. They offered us a future ride and place stay when we get to Waynesboro. Hiked to Bryant Ridge Shelter, where Nancy (aka, Lighten Up) wanted to revisit after our 3 month trip in 2012. She spent a lot of time sketching architectural diagrams during this stay. No-see-ums were biting a lot, and Craig (aka Kilt) barely slept as it was too warm to be in the sleeping bag and too buggy to be out. But we were happy to be under roof as there was a major thunderstorm that evening.
6/21 - Today is hike naked day but we didn't see any nudists. Arrived at Cornelius Creek shelter and met Ronin (again) and Gun runner, who saw some naked hikers. Sock fat, who is from Harrisburg, came later. Gun runner said he would steal the roof idea for his own. Lighten up said you can't steal a gift; Kilt said Karma will get you.
6/22 - Made some calls from Thunder Ridge from Kilt's phone as Lighten Up's was dead. Must have accidentally turned on in her pack. Stayed at Matts,Creek shelter. Met a local couple with a large pit bull. He was friendly after you "met" him but a intimidating to some hikers. Met Mailman and Ismael (again), who is 71 years old and thru hiking!
6/23 - Lots of nice views and some pretty serious climbs (for VA anyway). Stayed at Punch Bowl shelter. Water was flowing out of pipe thanks to to rain the last couple days. Started a fire and enjoyed the evening, which was our first without rain.
6/24 - Nice hike along many streams. Soaked our aching legs in one of them...natural icepack. Spent some time at Brown Mountain shelter as our previously arranged shuttle will not arrive until 3:30. Got to route 60 and a few hikers were looking for rides to Buena (pronounced BYU-na) Vista, which was were our shuttle was taking us. Arrived in town at the Bluedogart Cafe, got a shower, shuttle for resupply, and will get a shuttle back to the trail...all for $20 each.

Posted by Craig and Nancy at 2:24 PM No comments:

We're in Waynesboro.
Posted by Craig and Nancy at 2:15 PM No comments:


Although we are home, we decided to finish the blog for anyone who would enjoy reading the story to the end.

8/6 Nancy liked the trail name pack lizard, but Mark suggested shortening it to Izzy. Funny he's the second person to suggest Izzy as a trail name but for a different reason. Mark was packing up and almost left his hammock tie downs on the tree. Nancy reminded him of this, and Packman called him a Jackass. Mark responded, “Don't you worry Packman, I'll make it thru this.”  After stopping at Wilson Creek shelter, Craig took a long nap because he wasn't feeling well. Kayenta was not fully recovered either, so we decided to stay the night. Packman showed up and told us he saw Mark walking the wrong direction, and he would be here soon. Mark arrived about an hour later as it was raining and just stood out in the rain shirtless for about an hour. Packman though he was crazy. Mark later pulled a 3-pound crap shovel out of his pack and we all responded, “You didn't show us that yesterday!” He later decided to leave the shovel at the shelter.
8/7 Met Rerun and Mattie Bear who were hiking south. They had been a day or two behind (and sometimes ahead) of us going north and had been reading our journal entries since Erwin TN. They were hoping to meet us at the end of their trip, but didn't think it was possible based on our mileage. However because Kayenta and Craig slowed us down for the last couple days, it was possible. We talked for 40 minutes on the trail to this father and daughter hiking 400 miles together. We later realized that Rerun was the hiker who wrote the very touching journal entry about the death of Whitey and Red Headed Stranger at Laurel Lake. Nancy really wanted to meet the man who wrote this entry, and so it happened. Rerun and Mattie Bear mentioned that they had not seen any other hikers in over a day, and so we told them about Mark, Felix and Packman who would cross their path soon. We stopped at a shelter for a break. Mark arrived and said he met a father and daughter on the trail who asked, “Hey Mark, how is Felix doing?”. Mark thought, “Oh brother, I'm a goner.” They then admitted that we told them about him and his dog. We all decided to hike to the next shelter but Mark left first because he was slow. Packman could see that Marks dog Felix did not want to do anymore hiking, but Mark said he would make him.  As he was hiking up the long switch back trail away from the shelter, Packman was yelling potential trail names for him. As Mark neared the top, his dog Felix appeared back at the shelter, and settled right back onto his sunny rock where he had been enjoying his leisure time. Packman yelled, “Hey Mark, your dog is down here!” Mark replied, “Yea, I know”. Mark hiked back down and placed Felix in the top of his backpack and hiked out. We laughed the whole day about that until arriving at Cove Mountain shelter. Packman said he was going to eat and hike out about 2am to the next shelter...he never did. Bats flew threw the shelter as we slept.
8/8 Left early in the morning and came to an open vista where we could see that we were hiking above the clouds; beautiful view. Stopped and dipped our feet in a swimming hole at Jennings Creek. Stopped at Bryant Ridge Shelter which was an architectural dream. The shelter was reminiscent of a Japanese Tea House.  It had miniature Tibetan prayer flags hanging across the front.  Nancy did not want to leave but we had to walk to the next shelter (Cornelius Creek-which was the normal 3 sided lean-to) to make it to Waynesboro in a reasonable amount of time. Called Jean (Nancy our supply sending helper's sister) and Don, who live in Waynesboro, to tell them that we could attempt to hitchhike up the Blue Ridge Parkway and see how close we can get to their house. They responded that  they really wanted to pick us up despite the 140 mile round-trip. A bat flew above our heads in the shelter all night.
8/9 Nancy saw a large snake on the side of the trail; Kayenta and Craig were oblivious. It didn't rattle or hiss so we guessed that it was non-poisonous. Having arrived home and looked up snakes, we now think it was a poisonous cottonmouth.  Arrived at the Thunder Ridge Overlook on the Blue Ridge Parkway; this is our ending point and we are DONE HIKING. Jean and Don met us there, took our final photo picture and drove us to the James River Visitor center, Food Lion and to their house. Craig felt sick again for the rest of the day and into the night; he may have caught something from Packman who shared some hot tea.
8/10 Craig felt better as Jean and Don dropped us off in downtown Waynesboro. Enjoyed the day and drove the southern part of Skyline Drive. Camped that night at Creekside Campground in Edinburgh VA...cannot get enough camping!
8/11 Ate breakfast at Denny's and drove the rest of the way home. THE END.

THE SUMMATION OF OUR TRIP:

ONE APPALACHIAN JOURNEY,
SHARED WITH 3 STRONG-WILLED INDIVIDUALS,
ONE MAN,   ONE WOMAN,   AND ONE DOG,
EACH WITH DIFFERENT NEEDS, WANTS, AND OPINIONS.

ALL LIVING TOGETHER IN ABOUT 35 CUBIC FEET OF SPACE,
FOR 3 MONTHS,
WALKING ALMOST 800 MILES,
IN ALMOST EVERY TYPE OF WEATHER CONDITION.

We thank all our friends and family for your support, help, thoughts and prayers that made this possible for us to do.


Posted by Craig and Nancy at 3:49 PM No comments:

Confessions of a Neatnik Backpacker

Nancy started this trip determined to keep her things Clean, Neat, and in Order. Only Order seemed to be achievable to a decent degree. Nancy can't believe how much she has lowered her cleanliness standards to be able to live out in nature as a fast nomad.  Craig also stretched his definition of cleanliness.

Here are some things that we experienced that one would never do until he/she backpacked for more than a month:

1. Dirty and Sanitary have two different meanings.  Clean your hands after you do number two, everything else is just dirt.

2. Licking fingers saves the weight of napkins. Even if there is more than just food on your fingers….

3. You don't need 3 cleanup bowls for bathing, urinating in tent, and trash. One will do.

4. Licking dinnerware is a good substitute for a dishwasher.

5. The 3 (or 5) second "eating after dropping food" rule no longer seems to apply.  If you are hungry, eat it. And all backpackers are hungry.

6. Cutting garlic bulbs with your teeth is more efficient than using a knife because you don't need to clean the knife.

7. It is much more efficient to dig one hole for two people doing number two.

8. You will use your bath bowl to fill your drinking water bottle if desperate. Of course you will treat the water before drinking.

9. If chocolate melts on the inside of a Snickers wrapper, you can place the wrapper in your mouth and suck out the chocolate to keep the used wrapper from soiling your gear.  This is important because bears are strongly drawn to the scent of chocolate.
Posted by kikadoju at 3:29 PM 1 comment:

Made it to Waynesboro (by car anyway)

We're done hiking and making our way home. Here are some updates and will make it more current later.

Will fill in other details later.

Stayed in town because of Kayenta's back leg issue (think she was stung by a bee a couple days ago). We will be hiking low miles and watching her until Thursday; then getting a ride to Waynesboro where our car was dropped off by our hiking friends. 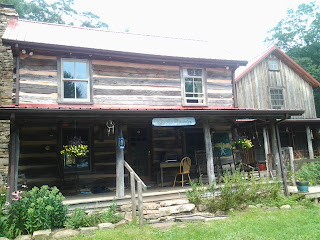 BTW We are in Pearisburg VA today.